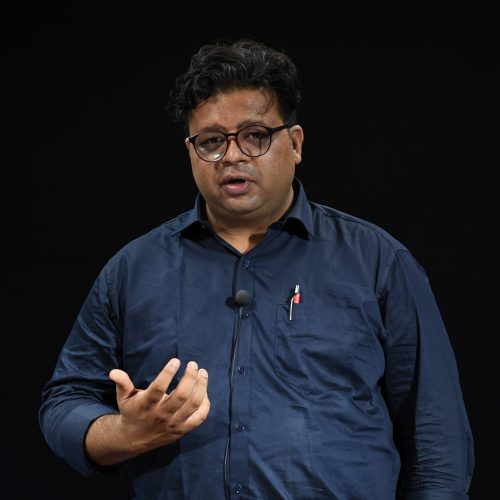 Dr. Sukant Khurana is researcher and entrepreneur, exploring neuroscience, drug discovery, biotechnology, artificial intelligence, data science, blockchain, and several areas of emerging technologies. He is a well-celebrated artist and author, exploring human senses and human condition. He has also been a tireless fighter for gender equity, social justice, sustainable development, and environment. His earlier grassroots level work caused him several harms, ranging from social media hacking to life-threatening physical attacks. He now focuses on social change through citizen science and data science. He is also a fierce advocate for ethical use of artificial intelligence, social media, and internet of things. He is a public speaker, blogger, podcaster, and science and technology advocate, known to communicate in various languages.
He has been known for his teaching and coaching skills just as much as research and development work and is known for lending support and sometimes leading campaigns for raising awareness of mental health, social isolation, and women health in collaboration with various international agencies. In recent years, there have been several movies and books on his efforts. He has received most of his advanced scientific training in USA and is currently (2018) based in India. His popular writing spans a large breadth, from very introductory technological texts to cutting edge theoretical works , small scientific monographs to comprehensive reviews of a field, science fiction novels to deep philosophical works, photo-journals to poetry. Like his art, which has been described as not fitting in any one genera, his popular writing also reflects his current interests and emphasis.

Currently he is working in a premier drug-discovery institute, CDRI, which has provided him with a rich exposure to the needs of health-care and how to apply artificial intelligence to solving these problems.His biggest focus is to popularize AI in India through citizen science.